At the USA Para-Badminton International 2017, held in Colorado from October 26th to 29th, Yonex’s Mamiko Toyoda put on a sparkling performance, winning the singles title and finishing second in mixed doubles competition! 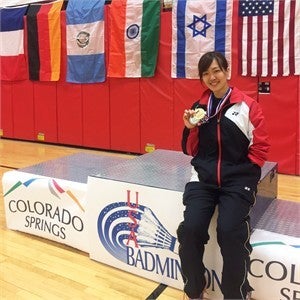 Para-badminton, which will be an official event of the Paralympic Games in Tokyo 2020 for the first time, it is now attracting a great attention from all over the world. The player population is currently expanding significantly and high level matches have been performed in every international tournament. Para-badminton players from 15 countries of Europe, Asia, and North and South America participated the USA Para-Badminton International and shown us exciting games in each class.

The singles final brought together classes SL3 and 4, and SU5. In a battle of two Japanese athletes, Toyoda won the first game 22-20. The second game was also closely contested, with Toyoda again emerging the winner, 21-19, to claim the title. The mixed doubles competition also combined classes SL3 and 4, with Toyoda's pair finishing a close second. "It was a tournament with a small number of participants, but I am very happy to have been able to win my first gold medal in a while. Next month, the World Championships will be held at long last. The powerhouse countries that took part in the tournament in Japan will also be there, so I am going to do my best to produce a good result there! I am hoping that everyone will cheer me on once again," says Toyoda.