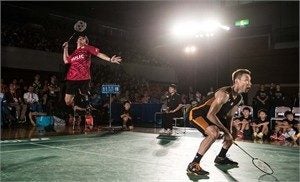 Approximately 180 players gathered from 28 different countries around the world to a big international tournament which has never been seen before. During the 4-day event, large crowds of over 3,500 people cheered along and commented such as "I was amazed at the power of Para-Badminton.” Para-Badminton will be an official competition from the 2020 Tokyo Paralympic Games. After the finals concluded another first, The Legends' Vision Japan, was held. Aimed at further promoting badminton, it was presided over by Legends of the badminton world, Peter Gade (Denmark), Lin Dan (China), Lee Chong Wei (Malaysia), Taufik Hidayat (Indonesia) and Lee Yong Dae (Korea). A total of 3,200 spectators packed the event with the entire venue wrapped in enthusiasm and enjoyment.

Yonex will continue the spread and development of para-badminton.