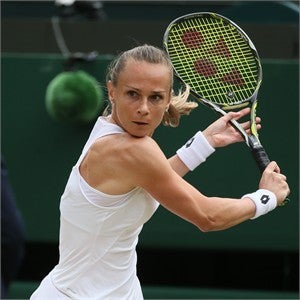 Wimbledon Day 8 brought with it an intense EZONE battle between world No. 87 Magdalena Rybarikova and world No. 24 CoCo Vandeweghe. The match concluded in 2 sets but was delayed due to rain and moved to the roofed Centre Court for its climax. Rybarikova, who was unable to play for half of the 2016 season due to injury, proved her hard training had paid off and was the better player on the day with a great win. Next up she faces No. 14 seed, Spain's Garbiñe Muguruza in the semifinal.