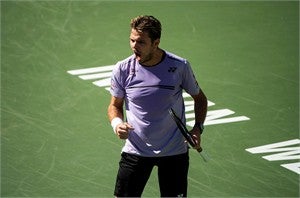 INDIAN WELLS, California — The unusually cool temperatures at the Indian Wells Tennis Garden didn’t stop action from heating up during the first week at the BNP Paribas Open.

Four head-to-toe players on the men’s side, including Stan Wawrinka (CHE), Yoshihito Nishioka (JPN), Hubert Hurkacz (POL), and Radu Albot (MDA), advanced to the round of 32.

Albot is currently one of the hottest players on tour. The Moldovan is on a nine-match winning streak, dating back to his first ATP title at the Delray Beach Open.

Wawrinka, who recently re-entered the top-50 after coming back from injury, fought through two three-set matches in the opening rounds and will face Swiss compatriot Roger Federer for a spot in the round of 16.

On the women’s side, defending champion and top-seeded Naomi Osaka (JPN) revenged her loss to Kristina Mladenovic from two weeks ago in the round of 64 to extend her winning streak in the desert to eight.

"Honestly, it was great that I got to play her again because I was able to learn from the mistakes I did back then, and I was able to apply it," said Osaka. "I just learned to be really positive and not give her anything."

Osaka, Belinda Bencic (CHE), who is coming off her third career WTA title after winning Dubai, Angelique Kerber (GER), and Anastasija Sevastova (LAT) are looking to join Marketa Vondrousova (CZE) in the round of 16. Vondrousova recorded an upset over Jelena Ostapenko and will face Simona Halep for a spot in the final 8.