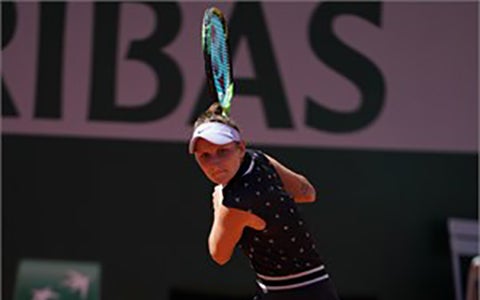 PARIS, France – 19-year-old Marketa Vondrousova (CZE) had to wait two days to play her first Grand Slam semifinal with poor weather conditions in Paris. But, like the tattoo on her arm says, “No Rain, No Flowers.”

To begin the match, the pressure of becoming the first teenager since Ana Ivanovic in 2007 to reach the Roland Garros finals seemed to mount. [26] Johanna Konta (GBR) was the most experienced player in the semifinals, having reached this round in Australia and at Wimbledon previously. The younger Vondrousova dropped the first 10 points of the match, but playing from behind seemed to be where Vondrousova thrives.

After leveling the opening set at 2-2, Vondrousova lost three of the next four games to go down 3-5. Like her quarterfinal match, Vondrousova saved three set points and started building momentum. In cold and windy conditions, the teenager flashed her crafty and consistent style and won the final four games to take the first set 7-5.

In the second set, Konta regained control, looking to take the very first set off of Vondrousova in Paris. The Brit used an early break and led the majority of the second set. Finding herself down 3-5 again, Vondrousova limited her errors and flashed flawless tennis to even the match and eventually force a tiebreaker.

Determined to finish the match in two sets, Vondrousova looked poised to advance to her first Grand Slam final. Cruising in the tiebreaker, she ended the match with a feathery backhand dropshot winner.

“It was a very tough match today,” said Vondrousova, who has the best win record on tour since the Australian Open. “I’m just happy I kept my nerves at the end.”

Vondrousova will face Australia’s Ashleigh Barty in the finals on Saturday, who is also having a career year. Barty has won the two previous meetings but neither match was on clay.