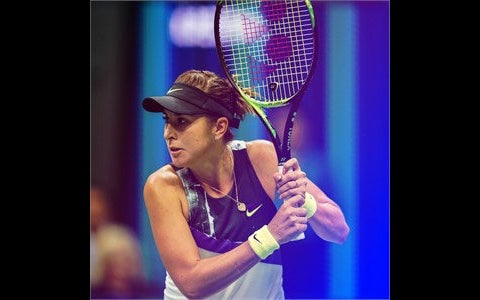 FLUSHING MEADOWS, NY — Belinda Bencic (SUI) made her US Open debut in 2014, where she defeated two top-10 players en route to a quarterfinal finish at just 17-years-old. She would reach a career-high of seven in the world as a teenager but would eventually fall outside the top-300 after injuries derailed her early success.

But now, Bencic is back at the same place she made her breakthrough in 2014, hoping to build on her best performance at a Grand Slam after reaching the semifinals with a straight-set win over Donna Vekic (CRO) on Wednesday.

"I worked hard for this,” said Bencic. “It’s not like I never imagined I could do this.”

After eight consecutive service holds, Vekic broke first and had an opportunity to serve for the first set at 5-4. However, Bencic immediately broke back to even the set again and captured the first set in a tiebreaker, 7-5.

"I think we played a very good match with high-quality rallies," said Bencic. "It was definitely not easy - I stayed calm in the important moments.”

Bencic reeled off 12 of 14 points midway through the second set to take a 5-3 lead and broke Vekic for a third and final time to advance with a 7-6, 6-3 victory.

"It was small points that changed the whole match,” said Bencic, who will play Bianca Andreescu for a spot in the finals on Friday. “I tried to put a little bit more variation in the game. I tried to play a little bit smarter.”