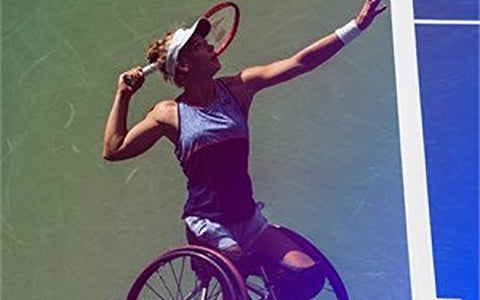 FLUSHING MEADOWS, NY — Diede de Groot (NED) swept the singles and doubles titles in the women’s wheelchair divisions at this year’s US Open, which was the 5th and 6th time de Groot has hoisted a Grand Slam trophy in 2019 alone.

In singles, top-seeded de Groot dropped only six games en route to the championship, setting up a World No. 1 vs. No. 2 final. Yui Kamiji, who previously defeated de Groot in the Australian Open final earlier this year, took the first set 6-4, but de Groot regrouped to score a come-from-behind victory, 4-6, 6-1, 6-4.

“It’s definitely a different game when you’re No. 1,” said de Groot after winning her 7th career Grand Slam singles title. “For a lot of years, you work to get to that point, to get to that number one spot and then when you’re actually there it’s like everyone’s after your spot. Everyone’s trying to chase you.”

De Groot then teamed up with compatriot Aniek Van Koot in the doubles final, cruising to a 6-2, 6-0 win over Sabine Ellerbrock and Kgothatso Montjane. The victory gave de Groot a Calendar Slam in doubles and also marked the seventh-straight Grand Slam doubles title for the Dutchwoman.