De Groot defeated Kgothatso Montjane of South Africa 6-2, 6-2 in under an hour to win her third Wimbledon singles title. She hit 30 winners and committed just 12 unforced errors in the finals.

The 24-year-old is the top ranked player in both wheelchair singles and doubles. Her next event will be the Paralympics at the end of August where she will be going for the Golden Slam.

On the men’s side, American David Wagner won his 21st Grand Slam doubles title. But this victory may be one of the sweetest for the 47-year-old.

Wagner, who reached World No. 1 in both singles and doubles in the men’s quad wheelchair division in the early 2000’s, had never won a Wimbledon title.

Now, he holds the career Grand Slam in doubles, after defeating top-ranked Dylan Alcott and Sam Schroder with Great Britain’s Andy Lapthorne in the finals.

Wagner will also be competing in the Paralympics for Team USA next month. 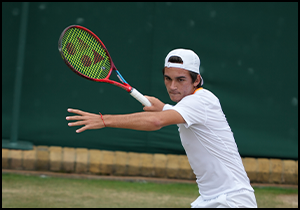