Naomi Osaka (JPN) defeated six-time U.S. Open Champion Serena Williams (USA) on the biggest stage in tennis. Dropping only one set en route to her first Grand Slam title, the 20-year-old was dominant in her road to the Championship. 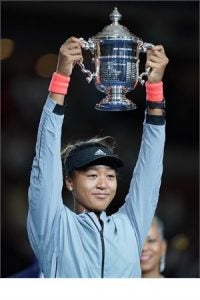 Take a look how Osaka became the first Japanese player to win a Grand Slam title:

Round of 128
def. Laura Siegemund (GER), 6-3, 6-2
Through brutally hot and humid conditions, Osaka fired off 19 winners and converted on 4 of 7 break points to advance.

Round of 32
def. Aliaksandra Sasnovich (BLR), 6-0, 6-0
In her second-straight 50-minute match, Osaka dismantled Sasnovich, who was having her best-career year to date, by winning 75% of the points.

Round of 16
def. [26] Aryna Sabalenka (BLR), 6-3, 2-6, 6-4
Osaka's fourth round match up was circled on the draw before she and Sabalenka had even advanced to the round of 16. In one of the most exciting matches of the tournament, Osaka refused to lose, as she overcame Sabalenka in a battle of 20-year-old rising stars.

"I was just thinking that I have to fight for every point," said Osaka. "Even if I break a leg I should try to get to every ball."

Quarterfinals
def. Lesia Tsurenko (UKR), 6-1, 6-1
In her first Grand Slam quarterfinal, Osaka showed no outward signs of nerves but said after her routine, straight-set victory, "I was freaking out inside. My entire body was shaking, so I'm glad I was able to play well."

Semifinals
def. [14] Madison Keys (USA), 6-2, 6-4
Osaka saved all 13 breakpoints she faced and made 70 percent of her first serves to advance with a 6-2, 6-4 victory. When asked after the match what her motivation was she quipped, “I just really wanted to play Serena.”

Finals
def. [17] Serena Williams (USA), 6-2, 6-4
Osaka's dreams were realized Saturday afternoon on Arthur Ashe Stadium after she defeated her childhood idol in straight sets. Osaka was just one-year-old when Williams won her first U.S. Open title in 1999 and was playing in a final that featured the second-largest age gap in the Open era.

Osaka moved to an impressive 32-0 after winning the first set in WTA matches this year. She only dropped serve five times the entire tournament and at one point save 22-straight breakpoints. With her win today, Osaka will make her top-10 debut in the WTA rankings next week.