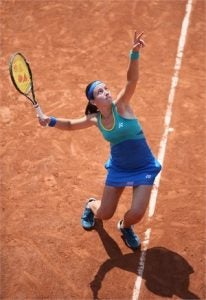 2016 Bucharest Open and Mallorca Open runner-up Anastasija Sevastova achieved victory in Spain, claiming her second WTA title. She earned the first one in 2010 at the Estoril Open in Portugal, becoming the first Latvian tennis player to win a WTA title in 17 years. Anastasija took a short break from the tour in 2013 due to injuries, but made a strong return to the court two years later. She earned four singles titles and three doubles titles at ITF tournaments, and reached her first Grand Slam quarterfinal at the 2016 US Open. This year, the Latvian advanced to the quarterfinals at the Dubai Duty Free Tennis Championships and Madrid Open, and took home her first title after her comeback following her victory over Julia Görges of Germany.

From the racquet and string to the clothing and shoes, Anastasija’s game is entirely supported by Yonex gear, which helped her to reach No. 19 in the WTA rankings.

EZONE players Martina Hingis and Anastasija Sevastova progressed to the finals in Women’s Doubles. The title was for the pair Hingis/Chan by walk-over.