The WTA Finals, held annually at the end of the season for the eight top-ranked WTA players and pairs on tour, took place in Singapore from October 22nd to 29th. 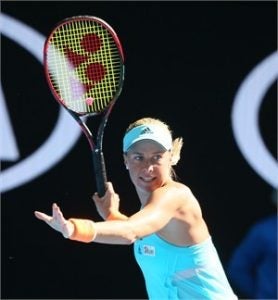 The pair Andrea Hlavackova / Timea Babos captured their first WTA Finals trophy following their thriller comeback victory over Johanna Larsson and Kiki Bertens in the finals.  En route to the finals, the pair also defeated the Women’s Doubles No.1 Martina Hingis and her partner Yung-Jan Chan in the semifinals, which would be the final match of the Swiss Miss’ 23 year tennis career. Andrea Hlavackova partnered Timea Babos at the start of the clay season with brilliant results, winning Quebec’s Coupe Banque Nationale, the Tashkent Open, and the Kremlin Cup, and achieving the runner-up in the China Open.

Coming away from a back to back win in Beijing and Wuhan, Caroline Garcia of France competed in the WTA Finals for the first time for Women’s Singles. Shaking off a straight set loss in the first round, she bounced back in her next matches with comeback wins from one set down in both to reach the semifinal round. Garcia’s hard fought matches position her with a year-end ranking at World No. 8.