LONDON — Angelique Kerber (VCORE PROTOTYPE / POLYTOUR FIRE 125) entered her match on Tuesday as the only female player to advance to all three Grand Slam quarterfinals this year. As the highest seeded player in a draw without any of the top-10 seeds, Kerber’s quarterfinal matchup was not going to be easy.

Kerber started off hot, as she won 12 of the first 18 points. Looking to avoid the upset bug, the German continued to pour on the pressure against 21-year-old Daria Kasatkina, who was playing in just her third Wimbledon, and won the first set 6-3 in just over 30 minutes. 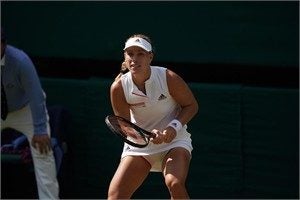 However, the crafty Kasatkina was not going to go away quietly.

“I was expecting a really tough and close match against Daria,” said Kerber.

Beginning at 3-2 in the second set, Kerber and Kasatkina broke each other in six consecutive games before Kerber would have her second chance to serve out the match. In an exhausting, 10-minute final game, where Kastakina would save six match points, Kerber held her composure and closed out the match with a 6-3, 7-5 victory.

"We both played at a really high level, starting from the first point,” said Kerber. "The last game showed how good we both played and how she was fighting until the end."