The year of Angelique Kerber continues! The World No. 1 tennis player was named as Germany’s Sports Woman of 2016 at a gala event held in the German spa town of Baden-Baden. 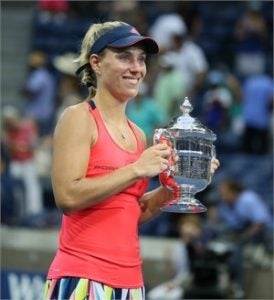 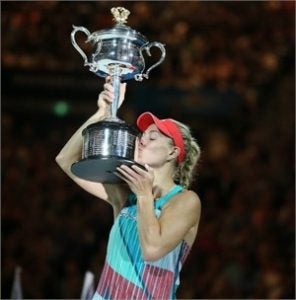 The German Sports Person of the Year award or “Sportlerin des Jahres” is awarded to the best male and female German athlete for that year, chosen from across all sports. Votes for the award are cast by sports journalists, with Angie winning by a landslide with 4,664 votes. In second place was biathlete Laura Dahlmeier with 1,940, and cyclist Kristina Vogel in third at 1,845.

Angelique had an absolutely incredible year, opening the season by winning her very first Grand Slam title at the Australian Open, becoming the first German player to win a major since Steffi Graf in 1999. She would continue this incredible performance by defending her title at the Porsche Tennis Grand Prix, and reaching the Wimbledon final. September would see Angie win her second Grand Slam title at the US Open, a victory that would shoot her up to the No. 1 spot. She would end the year by making a strong run to the final round of the WTA Finals. To add on to her great honors, she was recently named the 2016 ITF World Champion for her incredible performance this season.

2017 will see Angelique Kerber make her way back to the hard courts of Rod Laver Arena to defend her title at the Australian Open, starting January 16th. Be sure to keep your eyes out for her next big achievement!