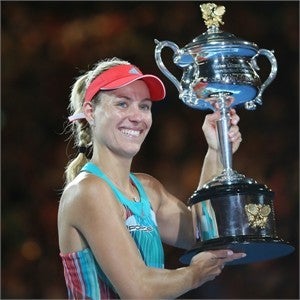 The stands at the majestic Rod Laver arena were buzzing with the cheers of ecstatic fans as German Angelique Kerber (VCORE Si 100, POLYTOUR FIRE 120) orchestrated a sublime career-first Grand Slam win against World No. 1 Serena Williams.

Remaining calm, cool and collected, the German was not intimidated by the challenge in front of her. In the face of the German’s rock-solid and assured play, Williams’ errors clocked in at 23 in just the first set. The match would extend to a third after the two women split sets, but the German would take control of the match once again. Tied at 2-all, Angelique reeled off three games to clutch a 5-2 lead. Despite Williams making an attempt to take the match, Angelique’s solid play once again put pressure on the World No. 1, winning her coveted first Grand Slam title when Williams sent the ball long on the champion point. The final score came to 6-4, 3-6, 6-4.

“It's an amazing feeling--my dream come true. I won my first Grand Slam title, and I gave it everything on the court tonight,” exclaimed the champ in joy after her big win. She had just switched to the new POLYTOUR FIRE 120 this season prior to the Australian Open, and had this say about how the string has improved her game, “I am really happy that I changed to the POLYTOUR FIRE. It gives me much more spin, power and control.” Of course, she also expressed her thanks to the Yonex Stringing Team, “They know my racquets, they know my strings, and how to string it exactly, so it was a big help for me.”

Angelique’s landmark victory shoots her up to No. 2 in the world rankings, and makes her only the second German woman to win a Grand Slam. Her thoughts looking forward towards the rest of 2016? “Right now I'm not thinking about the rest of the season. I'm just trying to get into my mind that I am really a Grand Slam champion right now.”

In mixed doubles, the giant-killing pair of CoCo Vandeweghe (EZONE DR 98) and Horia Tecau placed as finalists, defeating two seeded teams en route to their road to the final.