Team Yonex showed grit and determination, as Former Australian Open champion Angelique Kerber made a strong start to the year with a 14-match win streak. In Melbourne, she made the semifinals facing the current World No.1 Simona Halep in a long, heated battle. On the men’s side, Next Gen Champion Hyeon Chung became the first ever South Korean to make a Grand Slam semifinal. The young gun scored the biggest wins of his career, taking out No. 4 seed Alexander Zverev and former Australian Open champion Novak Djokovic. 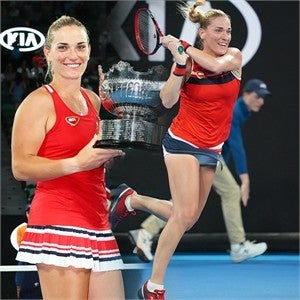 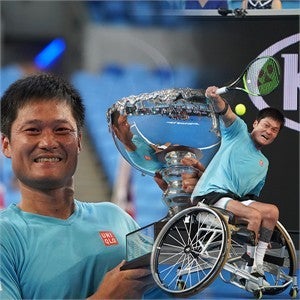 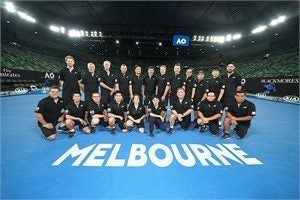 Shingo Kunieda returned to the Grand Slam spotlight with an epic battle in the final against Frenchman Stefan Houdet. Kunieda mounted a comeback from three match points in the final set to win his first Grand Slam title in 3 years. The win comes after having joined Team Yonex this year, and the 47-time Grand Slam champion accredits his EZONE 100 in unleashing powerful groundstrokes.

A new member to Team Yonex is Hungarian Timea Babos. Switching to the VCORE SV 98, Babos secured the Women’s Doubles title and finished as runner up in the Mixed Doubles event. The big-hitting Hungarian loved the new frame. “The racquet has a lot of speed and lots of control, which gives me confidence in my shots,” she explained.

The Yonex Stringing Team closes out another exciting year Down Under in Melbourne at the 2018 Australian Open. The team was comprised of a diverse mix of stringers from all over the world: 24 stringers from 15 different countries. Each technician on the team was devoted to providing top-level stringing to support the world’s best, working from the early hours of the morning to late at night. Tournament stringers are some of the unsung heroes behind the Australian Open. The Yonex Stringing Team is proud to serve at the year’s first Grand Slam event, nicknamed the "Happy Slam". This year the team totaled 5,206 restrings throughout the tournament, with a maximum of 500 per day.

Want to experience Grand Slam-grade stringing at home? Find a Yonex stringer near you here.