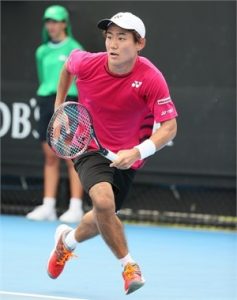 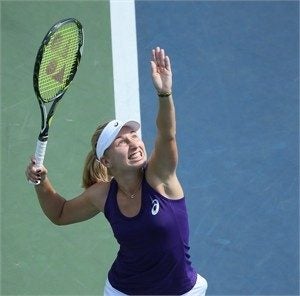 Another One for the Home Team

Hometown favorite Daria Gavrilova (EZONE DR 100, POLYTOUR PRO 125) came back from a set down to advance to round 2 after a tense outing with Brit Naomi Broady. Armed with the EZONE DR, the Aussie remained calm, cool and collected in the face of her heavy-hitting opponent, striking with precision and power. She would break the Brit in the second set to force a decider, where she set up match point with a potent forehand winner. She converted it, winning the match 3-6, 6-4, 7-5.


Japanese Youngsters into Round 2

Naomi came back from a set down to expertly dispatch Thai opponent Luksika Kumkhum with her ferocious forehand strokes, advancing to the second round with a final score of 6-7(2), 6-4, 7-5. Naomi is competing at this year’s tournament with the new Yonex REXIS string. The new string has more flex to effectively pocket the ball, while a super-dense inner-string structure puts more repulsion on the ball. “The string allows me to get more control on the ball, and it has more pop when I hit,” spoke Naomi, praising her new cross string.

Yoshihito picked up a landmark first match-win at the Australian Open, defeating local favorite Alex Bolt, 6-4, 1-6, 6-2, 6-4. Yoshihito broke his opponent five times en route to his first-round victory. “I like how my VCORE SV really puts a lot of spin on the ball,” commented Yoshihito on his gear after the match, “After this win I’m confident and see more good chances looking forward,” he continued, talking about his upcoming match.