The Yonex Stringing Team wrapped up its second consecutive year as official stringer of the Australian Open last Sunday, January 29th. The team at this year’s tournament was once again made up of a diverse group, this time composed of 25 stringers hailing from 15 countries. The stringers remained hard at work throughout the tournament, performing a maximum of 524 restrings in one day. The final amount of restrings at the end of the tournament came to 5,460—103% of the previous year’s total. 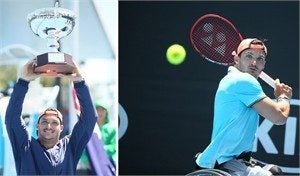 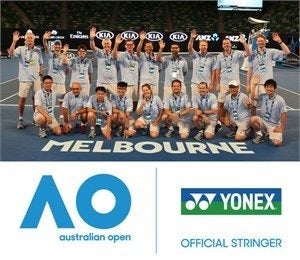 Want to experience Grand Slam-grade stringing at home? Find a Yonex stringer near you here.


Team Yonex at the Australian Open

This year would see 30 players at the Australian Open competing with Yonex tennis gear, boasting great results across a number of exciting matches.

Stan Wawrinka (VCORE Duel G 97, POWER CUSHION ECLIPSION) and CoCo Vandeweghe (EZONE DR 98) both picked up great wins over the two weeks, placing as semifinalists in men’s and women’s singles respectively. The un-seed CoCo pulled off a number of upsets at the tournament, picking up wins against the No. 1 and No. 7 seeds. Her results looking forward will certainly be something to keep an eye on. Meanwhile, women’s doubles would see Czech Andrea Hlavackova (VCORE SV 100, POLYTOUR PRO 125) place as finalist with partner Shuai Peng. Andrea recently started using the VCORE SV, harnessing its heavy spin and power to blast past the No. 1 and No. 3 seeded pairs.