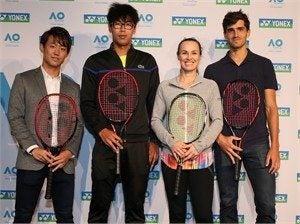 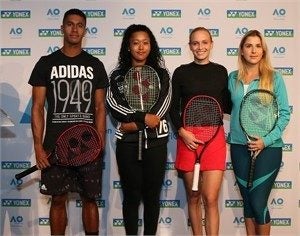 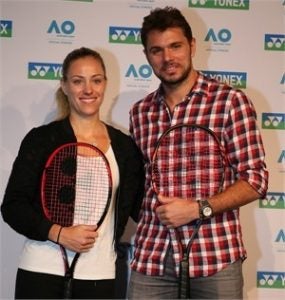 Team Yonex has a number of seeded players in the running for this year’s title: On the men’s side, Stan Wawrinka (VCORE Duel G 97, POWER CUSHION ECLIPSION) is the No. 4 seed and on the women’s side defending champ and World No. 1  Angelique Kerber (VCORE, POLYTOUR FIRE 120) is the No. 1 seed. Seeded home town favorites include No. 14 seed Nick Kyrgios (EZONE DR 98, POLYTOUR PRO 120) and No. 22 seed Daria Gavrilova (EZONE DR 100, POLYTOUR PRO 125).

Watch out for Stan, Angie and Nick throughout the tournament and Daria is set to play Tuesday night. Head-to-Toe Team Yonex players Stan and Belinda Bencic (EZONE DR 100, POLYTOUR PRO 125) will be playing in our new 2017 apparel.

To kick off this year’s Australian Open Yonex held a pre-tournament party, inviting players and stringers on Saturday January 14th.

16 Team Yonex players came out to meet roughly 170 attendees, including those hailing from several global press outlets. “We are very happy to be partnered with Yonex for a second year,” spoke Tennis Australia CEO Craig Tiley in the opening on-stage address. Local Australian stringer Steve Harris also took to the stage to cement Yonex’s commitment to the tournament; “we string to the players’ satisfaction, because if they’re satisfied they play at their best.”

Find a full gallery of photos from the party on our Facebook page.

Be sure to keep your eyes out on Team Yonex’s performance over the next two weeks, as well as more info on the Yonex Stringing Team!