The VCORE SV takes the WTA tour by storm!

New member to Team Yonex, Timea Babos, captured her 3rd WTA singles title at the 2018 Taiwan Open. The hard-hitting Hungarian has been seeing amazing results since her switch to Yonex. The title comes after a strong 2018 start, with a quarterfinal showing in Shenzhen, a first Top 10 singles win and Grand Slam doubles title at the Australian Open. Babos described this incredible run as an “amazing 5 1/2 weeks.” Ever since the change to the VCORE SV, the Hungarian has found confidence in her game commenting that her racquet has “excellent speed and control, which lets me trust my shots.” 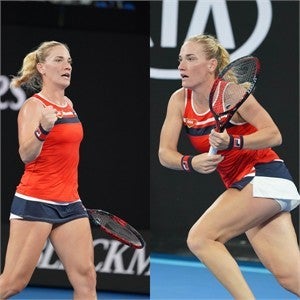 In women’s doubles, the pair of Ying-Ying Duan/Yafan Wang got the best of Nao Hibino/Oksana Kalashnikova pair in a VCORE showdown. The tournament was full of Yonex news as Yonex served as the official ball and official stringer during the event.

15 year-old Marta Kostyuk continues to shine in the pro tour spotlight. The teenager came away victorious on the ITF Women’s Circuit with her 2nd title at the Caterpillar Burnie International in Australia. The win comes right after the young Ukrainian captured the hearts of tennis fans during her stunning 7-match win streak for a 3rd round showing at the Australian Open, making her the youngest player to make the 3rd round of the tournament since Martina Hingis in 1996. The title has launched Kostyuk to World No. 185 in the rankings, making her the youngest female within the Top 200. As she transitions from the junior to professional tournaments, the WTA Tour will become her primary battleground as her ranking surges upwards.