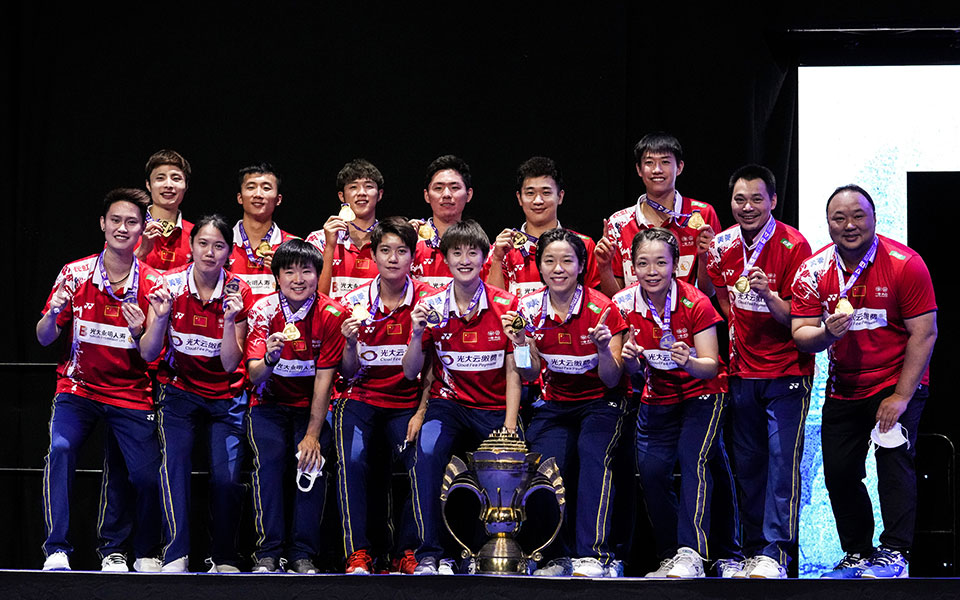 VANTAA, Finland – The TotalEnergies BWF Sudirman Cup Finals 2021 came to a close with China reclaiming the championship title with a 3-1 victory over Japan. This mixed team world championships, taking place once every 2 years, is also a place to take bragging rights for having the most well-rounded team on the international circuit.

The finals kicked off with men’s doubles, with a heated match-up between He Ji Ting and Zhou Hao Dong (CHN) and Takuro Hoki and Yugo Kobayashi (JPN). Both pairs are new to being the lead men’s doubles for their countries, but the performance showed both great skill and great passion. After 3 fast-paced games, the Chinese pair earned their team the first point with a score of 21-17, 14-21, 21-16.

Following on center court was the rivalry between Chen Yu Fei (CHN) and Akane Yamaguchi (JPN) in the category of women’s singles. Despite Chen Yu Fei being the late Olympic gold medalist, their head-to-head record was a near-even 8 wins to 10 wins, respectively. Yamaguchi was determined, making few mistakes and showing confidence in her pace, ultimately tying the team score to 1-1 with the result, 21-19, 21-16.

The much-anticipated match was Shi Yu Qi (CHN) versus Kento Momota (JPN). With Momota showing signs of a comeback, and Shi Yu Qi was ready for the challenge. The crowd saw a divide in playstyle with Momota defensively covering the whole court while Shi Yu Qi continued to attack with high intensity and high speed. In the final game, Shi Yu Qi cranked into sixth gear and bagged 10 consecutive points, sealing the match at 21-13, 8-21, 21-12.

In women’s doubles, Chen Qing Chen and Jia Yi Fan (CHN) faced Mayu Matsumoto and Misaki Matsutomo (JPN). The Japanese pair were an expected duo as their partnership was seen for the first time here at the Sudirman Cup. Their chemistry on court was strong, but was not enough to outtake the Tokyo Olympic silver medalists. Chen Qing Chen and Jia Yi Fan clinched the championship point and concluded the match and tournament with a score of 21-17, 21-16.

Yonex is a proud partner of the TotalEnergies BWF Sudirman Cup Finals 2021. Yonex supplies the highest quality equipment required for world-class badminton, ranging from court mats to shuttlecocks and more. The competition is also supported by the Yonex Stringing Team, a team of experts that provide reliable stringing services for top athletes and their equipment.