Nanjing, China — On the night before the start of the TOTAL BWF World Championships 2018, Yonex held a special event to announce the release of the new ASTROX 99 racquet. At the event, Kento Momota — who will use the ASTROX 99 beginning from this tournament — and Lin Dan appeared as surprise guests. Media from all over the world were at the announcement event, and it gained tremendous attention across the badminton world. 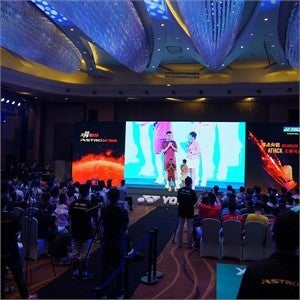 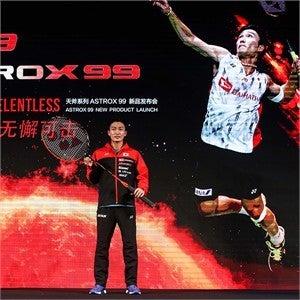 “This racquet has more feel than any racquet I’ve ever used,” Momota said of the ASTROX 99. “Because it fits my play style so well, I have very high expectations for it. I’m hoping for victory at the World Championships with the ASTROX 99.”

Lee Chong Wei, who had also planned to use the ASTROX 99 beginning in Nanjing appeared via a video message. “Unfortunately, I cannot be at this year’s tournament,” he conveyed to the crowd, “but I’ll try to recover soon to meet everyone in competition again.”

Lin Dan made a surprise appearance on Lee Chong Wei’s behalf, stating that he wanted to be there and stoke excitement in place of his good friend.