In the final round of the China Open(Fuzhou), on the 19th, ASTROX user Marcus Fernaldi Gideon and Kevin Sanjaya Sukamuljo (Indonesia) put on brilliant, winning performances. 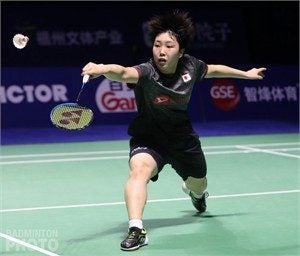 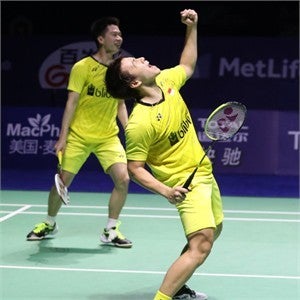 The team of Gideon and Kevin are carrying the men’s doubles game in every sense. The pair pulled off five straight victories to claim the China Open title. In the final, they encountered their rivals Mathias Boe and Carsten Mogensen (Denmark) for the fifth time this season, seeing them off 21-19, 21-11. “My smashes are more powerful than ever before, and the shuttlecock is flying at a higher speed,” said ASTROX user Gideon of the racquet’s robust performance. Having joined Team Yonex this year, the pair has already claimed four Superseries titles this season. They are currently cruising along as the top-ranked team in the world.

In women’s singles competition, Akane Yamaguchi (Japan) won her fourth Superseries title. This tournament saw Yamaguchi defeat Ratchanok Intanon (Thailand) 21-14, 21-18, interrupting a recent run of great performances that had included a victory over the world’s top-ranked player. In the final, Yamaguchi defeated the towering local favorite 21-13, 21-15. With this victory, Yamaguchi is assured of entering the Dubai World Superseries Finals 2017 (December 12th-17th, Dubai) with the number one ranking.

The top eight players and pairs in each category, as determined by Superseries point totals, will earn the right to appear at the Dubai World Superseries Finals 2017. On November 21st, the curtain will rise on the YONEX-SUNRISE Hong Kong Open, the last chance for players to secure a place in Dubai. The thrills are set to continue, right up to the very last moment!