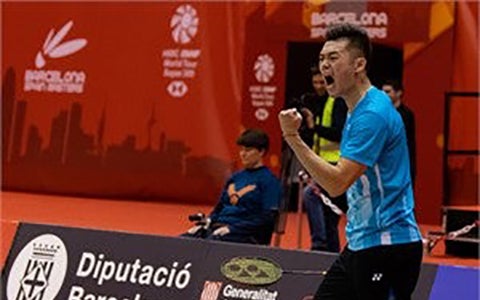 BARCELONA, Spain — Yonex’s new convention-defying headlight racquet made its debut this past week at the Barcelona Spain Masters 2019, wielded by two different #TeamYonex athletes, who both took home a gold and a silver, both against each other, in two different categories.

In the first match of the day, mixed doubles, Seo Seung Jae (KOR), carrying the NANOFLARE 700 in blue/green and Chae Yu Jung (KOR) faced off against Wang Chi-Lin (TWN), wielding the red 700 and Cheng Chi Ya. In straight games, Seo and Chae captured victory, 21-18, 21-15. But in men’s doubles, Wang had his revenge. There, along with partner Lee Yang, was victorious over Seo and partner, Kim Won Ho, 21-8, 23-21, ensuring that Wang and Seo both went home with a gold and a silver, just in different categories.