CoCo Vandeweghe finished her season strong with her new EZONE 98 in hand. She checked 2 goals off her bucket list with a Top 10 debut and successfully led her team to a 2017 Fed Cup title against Belarus. Vandeweghe secured victory in all of her matches (6 singles and 2 doubles) in this season's Fed Cup, becoming the first player to win 8 matches since 2005. Her signature power game led by her groundstrokes and serve were enhanced by the explosive power of the new EZONE racquet. Vandeweghe herself was impressed by the racquet's high performance describing how she was “able to serve ace after ace with its amazing power.” 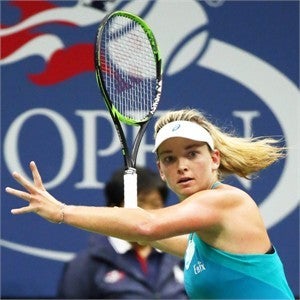 Since returning from injury, Belinda Bencic has posted an overpowering 18-3 record and captured her first WTA title at the EA Hua Hin Championship with her new EZONE 100. The title will project Belinda to World No. 120 as she eyes to finish the year strong leading into the Australian swing.

* Photograph of Vandeweghe is from the 2017 US Open.