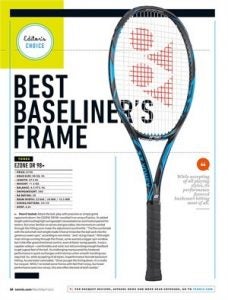 Praise for the EZONE DR 98+

This time American Tennis Magazine gave the Editor’s Choice Award for “Best Baseliner’s Frame” to the EZONE DR 98+ in the magazine’s Racquet Guide, found in the March/April issue. Testers praised its high performance and versatility, as well as its exceptional precision, even at faster swing speeds. A reviewer stated, “while I’ve tested some frames with feel that I enjoy, but lesser performance (and vice-versa), this one offers the best of both worlds.”

This issue of Tennis Magazine also featured a review of the VCORE SV 100+. The racquet was praised as stiff yet comfortable, providing enhanced swing speed and impressive power. “Twice I managed to get into love-40 holes, then came back to win the game―once winning five points in a row, all off of heavy first serves,” commented one tester.

Along with looking at racquets, the magazine also took a look at Yonex strings. The POLYTOUR AIR 125 was praised for its shock absorption and repulsion, as well as its combination of comfort and power with the control and durability of polyester. There was also a quote from Nick about his POLYTOUR PRO 120 strings, “They suit my game, so I’m nice and aggressive. I can create a lot of spin and at the same time my string allows me to have a lot of control.”