Launching in late March of 2018, Yonex’s EZONE TP-F1B Putter joins the Triprinciple range, used by multiple top pros who have enjoyed the remarkable results of putters which promise to “sink more than 90% of one-meter putts.” The new EZONE TP-F1B Putter was not only developed following the Triprinciple Theory but incorporates a unique vertically milled face for improved accuracy, as well. 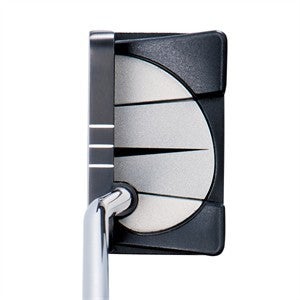 The Triprinciple Theory states that - provided the club face is square at impact - any stroke which falls within the 5.61° marks delineated on the back of the club head will find the cup. This valuable performance benefit has attracted many top pros to put Triprinciple putters in their bag.

The TP-F1B Putter, in addition to being developed with the Triprinciple Theory, has a vertically milled face, which in comparison to traditionally milled faces, provides straighter putts and improved accuracy. Furthermore, the square head shape’s measurements are designed according to the Golden Ratio, and it incorporates a Fibonacci curve design, making the putter more comfortable at address with the club face open.

Additionally, the goose-neck design and a balanced face ensure a stable stroke for a smooth roll.


*Figure based on a scientific theory. Percentage not guaranteed.

The square head shape’s measurements are designed according to the Golden Ratio and it incorporates a Fibonacci curve design*, making the putter more comfortable at address with the club face open.

*The Fibonacci sequence is a series of numbers in which the sum of the two preceding numbers equals the next number in the sequence. The resulting ratio closely approximates the Golden Ratio. A line drawn tracing the curve of our own Milky Way galaxy would resemble the Fibonacci sequence.

3.    As a rule of physics, a putt made within the guidelines will always find the cup


The above diagram illustrates that for putts within a range of one meter, providing the club face is square at impact, any stroke made from 0° (square) to 5.61° (equal to the distance of about one ball, illustrated by the red line above), will theoretically follow the green line and make the putt.