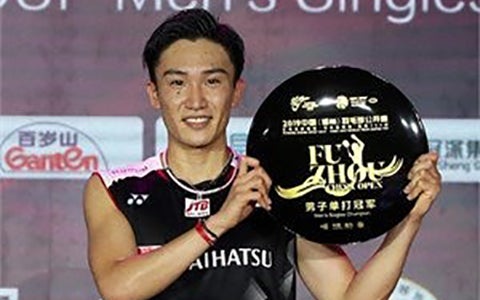 Fuzhou, China – It was Team Yonex vs. Team Yonex in three of the final categories on Sunday at the Fuzhou China Open 2019, as Kento Momota (JPN) won a thriller over Chinese Taipei’s Chou Tien Chen, to tie on his tenth gold medal of the year.

While Momota seemed to set the pace and control early and took the first game handedly, it was nearly the opposite in the second. In the third, Momota jumped out to a 4-0 lead, but Chen, as tenacious as ever, clawed back to 14-all. But after the clock read one hour and twenty-three minutes, Momota was able to convert match point for a 21-15, 17-21, 21-18 win.

The minions Kevin S. Sukamuljo and Marcus F. Gideon (INA), not to be outdone, added their eighth title of the year, and their fourth consecutive Fuzhou China Open championship, as they rolled past Takeshi Kamura and Keigo Sonoda (JPN). The Japanese put up a stiff fight in the the first game, but Gideon and Sukamuljo exploded in the second, winning 21-17, 21-9 in just thirty-three minutes.

In women’s doubles, Yuki Fukushima (JPN) and Sayaka Hirota (JPN), who emerged from a marathon semi-final against the Chinese pair Chen Qing Chen and Jia Yi Fa, won their first final since July, defeating Koreans Lee So Hee and Shin Seung Chan, 21-17, 21-15. In so doing, they become the first Japanese women’s doubles pair to win gold at the Fuzhou China Open.