The finals of the YONEX-SUNRISE Hong Kong Open Superseries (Kowloon) were held on the 26th, and Marcus Fernaldi Gideon and Kevin Sanjaya Sukamuljo (Indonesia) triumphed for their second consecutive tournament victory. Lee Chong Wei (Malaysia) also easily won all his matches to come out on top. 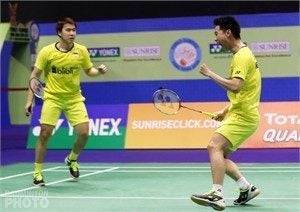 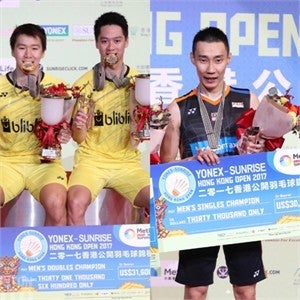 Gideon and Kevin’s momentum hasn’t stopped. They claimed victory at last week’s China Open Superseries Premier, and will even show their overwhelming power at the current tournaments. In the final game of the semifinals, they controlled the match by widening the lead with eight straight points. The POWER CUSHION 65Z is also supporting their footwork, with the pair saying, “The shoes felt comfortable from the first time we put them on and allow us to make nimble plays.” The pair has had six total victories this season, beginning with the Yonex All England Open Badminton Championships, which equals the 2015 record of Lee Yong Dae and Yoo Yeon Seong (Korea) for the most men’s doubles victories. “It is an unbelievable year. We want to finish it off by winning a championship in Dubai,” the pair said, as they stand ready for their opportunity to become the year’s kings of the Superseries.

Lee Chong Wei, seeded eighth, defeated the number two ranked player in the world from Korea, winning an overwhelming victory in the semifinals, 21-11, 21-12. Afterward, he also beat a highly-ranked Chinese player in straight sets and beamed as his championship was assured. Armed with DUORA, his pressing play in decisive moments is going strong. The expectation of the performance shown by highly skilled veteran rises in upcoming “Dubai World Superseries Finals 2017” (Dec. 12-17 in Dubai).