Bukit Jalil, Malaysia – Lee Chong Wei reaffirmed his legendary status with a championship win at the Celcom Axiata Malaysia Open 2018 — his 12th title in 15 years at the event. Wei ended the 21-match comeback win streak of Kento Momota, to send the home crowd into euphoric celebration. In other areas, the tournament seemed dominated by Japan, as Japanese players took first in women’s doubles, and first and second in men’s doubles. 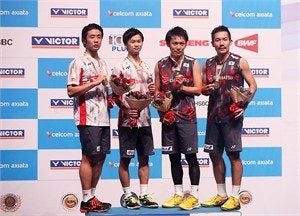 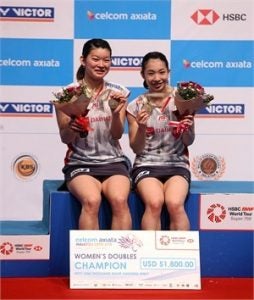 At their last meeting at the semi-finals of the Asia Championships in April, it was Momota who claimed victory. Having been on a winning streak since then, many expected him to deny Wei his dozen titles. But at this event, it was Wei who controlled the match, varying between softer shots and his deadly jump smash to win 21-17, 23-21. In the end, Momota congratulated the champion, telling BWF “He changed the game today, compared to our last meeting. Today he played several variations at the net, and he was fast and powerful in his smashes. Even though he is 13 years older than me, he is still very strong and I have a lot of respect for him.”

In men’s doubles it was an all-Japan affair as Takeshi Kamura and Keigo Sonoda defeated compatriots Hiroyuki Endo and Yuta Watanabe in a somewhat one-sided 21-8, 21-10 victory. Both pairs battled through Chinese teams in the semis before reaching the finals.

In women’s doubles, Olympic Champions Misaki Matsumoto and Ayaka Takahashi faced off against World Champions Chen Qingchen and Jia Yifan. Matsumoto and Takahashi were once again in top form as they closed the match 21-12, 21-12.

The World Tour continues through Indonesia, Thailand and Singapore before concluding at the end of this month at the TOTAL BWF World Championships 2018 in Nanjing, China.