Still hard at work in the second half of this year’s Australian Open with nearly 5000 racquets strung, we would like to introduce another member of the YONEX Stringing Team: Kian Pin Lay. 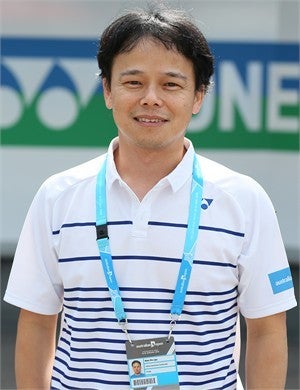 Kian Pin Lay originally hails from the country of East Timor, but has been living in Melbourne, Australia since 1999. An avid practitioner of badminton as a young teen, Kian, like most to-be stringers, found himself breaking strings with great frequency. Instead of constantly asking someone to restring his racquet, he took up the art of stringing on his own. Being based in Australia, Kian’s top class skills landed him with a stringing gig at the Australian Open in 2009, which he has been stringing at every year since.

His thoughts on the YONEX Stringing Team? “This team is very exciting—very good stringers. It’s a really great team.” He also offered his thoughts on stringing in Australia’s hot climate, “In weather like this, you have to think of adjusting the stringing tension a bit from the normal amount to match the climate.”

Find more information about the YONEX Stringing Team at its official website.