Yonex is proud to announce its newest line of products for hard-hitting players. Developed in Japan, the new VCORE Pro racquet and PolyTour Strike string were designed for players transitioning into a faster-paced game. 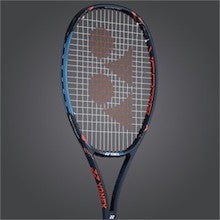 The VCORE Pro features a combination of new technologies to enable players to deliver heavy spin shots to overpower their opponents. By using Namd[1], a revolutionary graphite that enables a unique flex for a fast frame snapback, and a LOCK BOOSTER grommet system for efficient energy transfer and ball crushing power, players are able to grip the ball and fire off aggressive, attacking spin.

The ATP’s Next-Gen Champion Hyeon Chung (KOR) and Frances Tiafoe (USA), who is fresh off his first ATP title in Delray Beach, will debut the VCORE Pro next week at the BNP Paribas Open. You can join Chung, Tiafoe, and Pierre-Hugues Herbert (FRA) at the VCORE Pro Worldwide Launch and Demo Day on March 6th in Palm Desert. For more information and to register for the event, click here.


Just as important as choosing a racquet, selecting the right string is critical to your game. Tested by Denis Shapovalov (CAN) and Caroline Garcia (FRA) during their breakout seasons in 2017, the new PolyTour Strike has long-lasting tension performance that allows players to confidently strike with overwhelming power and precision.