Earlier this month on October 7th, Nick Kyrgios (EZONE DR 98, POLYTOUR PRO 120) announced that he would donate $50 for every ace he hits until the end of the season on his Twitter account. 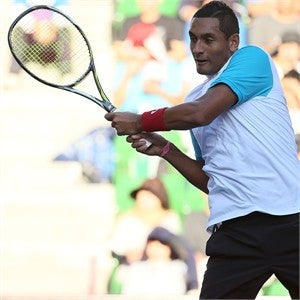 The money will go to the Elena Baltacha Foundation, an organization founded by British tennis player Elena Blatacha and her husband Nino Severino with the objective of helping children from all backgrounds develop a passion for tennis. Since Baltacha’s passing in 2014 due to cancer, her husband has been running the organization, which continues to provide instruction to children across the world.

The young up-and-coming Australian—who has earned wins over Top 10 players like Rafael Nadal since turning pro—has hit a total of 499 aces this year across all surfaces and 801 throughout his career.

In 2014, Nick donated £5 per ace hit at that year’s Wimbledon towards the Rally for Bally cancer fund, a charity that was established in memory of Elena Baltacha upon her passing.