Niigata, Japan ― The YONEX Junior Golf Championship 2018 was held for the 11th successive year at Yonex Country Club on August 28th and 29th. 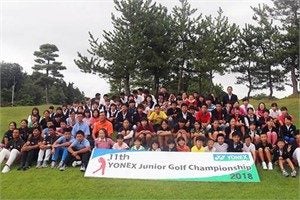 Since it started in 2008, the tournament has seen players from around Japan participate but beginning in 2016, international players were allowed to compete as well, and this year saw a total of 12 players from China and Thailand join the Japanese juniors. At this year’s tournament, 121 juniors competed across the categories of lower-elementary school boys and girls, junior high school boys and girls, and high school boys and girls. It became a heated competition, with the winning score being under par. First place in the junior high and high school girls’ divisions earned the right to compete in the women’s tour event, YONEX Ladies Tournament, while second place will play in the YONEX Ladies Qualifying Tournament, with the possibility of earning a spot in the main competition. On the boys’ side, first place in the junior high and high school divisions earned a chance to qualify for the mens’ tour event, Mynavi ABC Championship, by playing in the qualifying tournament. After some top-class play, Akihiro Suzuki (high school boys’ champion), Mitsuki Kimura (high school girls’ champion), and Chisato Iwai (high school girls’ runner-up) emerged as the winners.