After being welcomed by an extravagant party in Tokyo, Stan Wawrinka (VCORE Tour G, SHT-PRO) made a strong start to his 2015 Rakuten Japan Open campaign. 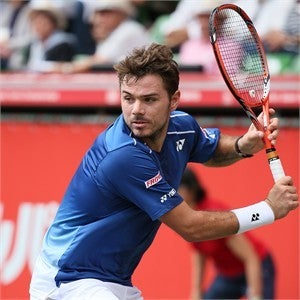 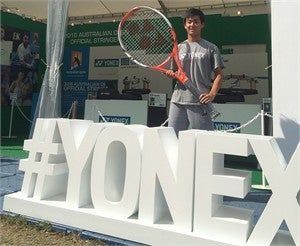 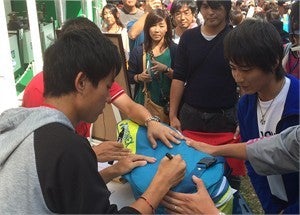 The Roland Garros champion took to the court against Czech Radek Stepanek, expertly harnessing the power of his explosive backhand to get the edge over his opponent. The Swiss’ potent serves combined with a pivotal break brought Stan to a 4-1 lead in set 1, where he would eventually prevail by converting the first set point that came into sight. Two crucial aces would set the tone for the match’s second set, where he rushed to a 3-0 lead. With 11 aces to his name throughout the match, Stan advanced to the second round with a final score of 7-5, 6-3.

Nick Kyrgios (EZONE DR 98, POLYTOUR PRO 120) came back from a set down to grasp a 6-7(3), 6-3, 6-3 win over Spain’s Albert Ramos-Vinolas. Competing with the new EZONE DR, the Canberra native fired off 12 sizzling aces on his way into the second round. In men’s doubles, Pierre-Hugues Herbert (VCORE Tour G) and Nicolas Mahut are into the quarterfinals defeating Austin Krajicek and Yasutaka Uchiyama. Despite facing some resistance in the second set that lead to a tiebreaker, the two advanced with a straight 6-4, 7-6(4) win. The French duo launched off five aces, and saved all four break points faced. Pierre-Hugues won the men’s doubles title at last year’s tournament paired with Michal Przysiezny.

Young local rising star Yoshihito Nishioka (VCORE Si 98, POLYTOUR SPIN, SHT-FUSIONREV) made an appearance at the Yonex booth in front of an ecstatic crowd of roughly 200 fans. Having made a name for himself in his native Japan, the fledging Yoshihito expressed his thoughts and explained his goals about competing on the global stage. He signed a number of different memorabilia for his fans, including bags and t-shirts.