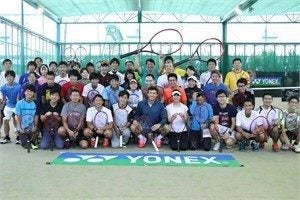 Nick will step onto the court with the new blue EZONE DR, while Yoshihito and Juan will compete using the new VCORE SV.

On the Saturday before the tournament, 40 lucky local fans got the chance to meet pros Juan and Yoshihito at a VCORE SV and EZONE DR demo day. Titled the “VCORE & EZONE Power-Up Clinic,” Juan, Yoshihito, and two other Japanese pros instructed the participants through demonstrations, one point lessons, rallies, and actual matches with the fans.

Pico lead the way, offering insightful advice to the participants, “Connect your shots to your footwork,” he said, “go from a strong stance to a strong step, and hit.” Always happy to meet fans, he played several games with the excited participants.

Fans praised both of the racquets after trying them out. “It puts a lot of spin on the ball,” commented one fan on the VCORE SV, “the swing is also very smooth.” On the EZONE DR, fans had this to say, “The racquet has a lot of power, and the speed is very good.” Fans were able to accurately gauge their results using the Sony Smart Tennis Sensor.

Be it the super-spin of the VCORE SV or the potent power of the EZONE DR, both racquets were a big hit with the fans.