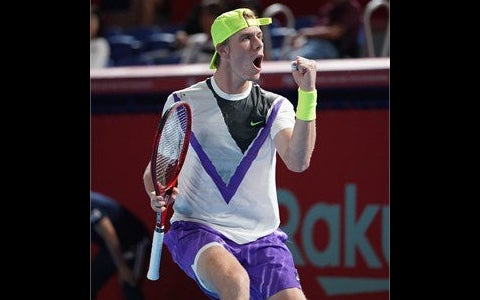 STOCKHOLM — Earlier this week, Denis Shapovalov (CAN) qualified for the Next Gen ATP Finals for the third time in his career. The 20-year-old has been one of the brightest young players on the ATP Tour but had yet to win an ATP title until Sunday.

Shapovalov snapped his streak of seven semifinal appearances without advancing to the finals with a straight-set victory over Yuichi Sugita at the Stockholm Open.

“I think he played really well at the beginning,” said Shapovalov, who battled nerves early in the match. “I've played a lot of semis it feels like, so it's really exciting to be into my first final.”

In the finals, Shapovalov faced Serbian Filip Krajinovic for their first career meeting. Going into the match with a lot of unknowns, Shapovalov was locked in from the beginning.

The Canadian secured an early break in the opening set and dropped only two points on serve to take the first set, 6-4. At 4-4 in the second set, Shapovalov secured his second break of the match, giving himself the opportunity to serve for the championship.

Relying on his serve the entire match, Shapovalov saved his best for last, jumping out to a 40-0 lead in the final game. He converted on his first match point to win his maiden ATP title, 6-4, 6-4.

“I told myself as long as I keep taking care of my serve I will be okay,” said Shapovalov, who returns to the top-30 after his performance this week. “In the second set, it was a little bit tough. I had a lot of deuce games on his serve and I wasn’t able to convert. I just kept fighting and stayed patient - sooner or later I was able to get the break.”

Shapovalov returns to the court in Vienna for the Erste Bank Open before heading to Milan for the Next Gen ATP Finals.