Stan Wawrinka (VCORE Tour G, SHT-PRO) has touched down in Tokyo! Before kicking off his 2015 Rakuten Japan Open campaign, the two-time Grand Slam champion attended a VIP party to welcome the Swiss star to the Japanese capital. 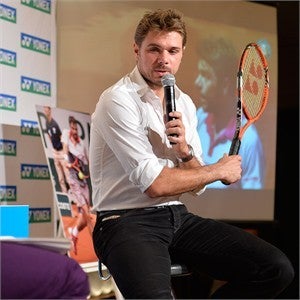 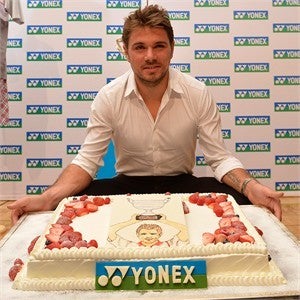 Japanese tennis luminaries from across the nation gathered at the event to meet the World No. 4. Acting as MC for the event was tennis expert Florent Dabadie, who welcomed Stan The Man to the stage. Backed by enthusiastic applause, Stan entered with the Australian Open trophy in his hands—his first Grand Slam title. "I'm happy to be back in Tokyo, and looking forward to playing well at this year's Rakuten Open," greeted the Swiss.

Local high school students in attendance then presented Stan with a large celebratory cake, decorated with a drawing of him holding his Roland Garros trophy. After a toast, Stan posed with fans for pictures with the Australian Open trophy.

The event continued with a question and answer session, where Stan spoke candidly about the sport he loves. He talked about the development of his renowned backhand, his beginnings as a young tennis player in Switzerland, and how he developed his own style that helped him reach his current level.

In closing, Stan made his way through the crowd, talking directly to his fans and taking questions. After posing for a final photo op, Stan The Man made his exit to rest up before the tournament. Stan’s exit was followed by a quiz competition and lottery where fans had a chance to win memorabilia signed by the man himself, including key-chain versions of Stan’s famous Roland Garros shorts, along with signed shoes, racquets and various other gear.

Look out for a video of the event coming soon!

Stan heads into the first round of the Rakuten Open against Radek Stepanek. Stan won in their most recent encounter in 2013 at the US Open, with the Swiss winning, eventually making it to the semifinals.