Houston, Texas – Steve Johnson (USA) successfully defended his title at the U.S. Men’s Clay Court Championship. The 6th seeded American defeated countryman Tennys Sandgren, the 8th seed, in a two-and-half-hour-long, three-set match, 7-6(2), 2-6, 6-4. Johnson began using the Yonex VCORE SV in January of 2017, and the repeat victory in Houston sets up a promising start for him at the opening of the clay court season. 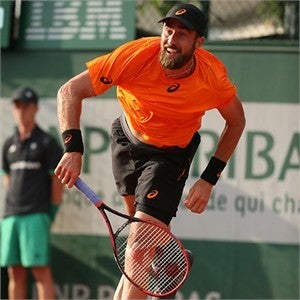 On his way to the final, Johnson battled through first seed John Isner, fresh off a title win in Miami, in the quarter-finals, as well as 20-year old Taylor Fritz in the semi-finals. Isner fired off 28 service aces across three sets but was ultimately unable to come up with enough answers for Johnson’s controlled game.

In the final match, Johnson played aggressive tennis, hitting kick serve aces and low-and-cutting backhand slices. In the second set, Sandgren saved three break points to force the final set, but it was there that Johnson eventually pulled away, re-capturing the title. Of playing with the VCORE SV, Johnson said “(it) has really helped my game, giving me more power and control. I can hit a deeper ball now, and really get the edge over my opponents.”

Photo from the 2017 French Open