Tokyo — Kento Momota added another title to his recent comeback and made history again, becoming the first men’s singles player to win the Japan Open in its 41-year history. 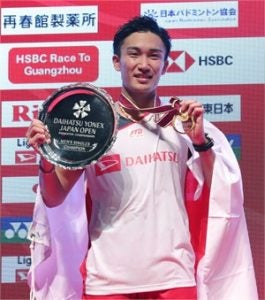 Momota sailed through the draw without dropping a game. In the finals, he faced unseeded Khosit Phetpradab, who was competitive early in the first game. However, at 14-14, Momota pulled away with precise shots and went on to win the next seven points to take the first game. He continued his high level and came out with a 21-14, 21-11 victory in just 48 minutes.

In women’s singles, reigning World Champion and 2017 Japan Open Champion Carolina Marin (ESP) faced former World Champion and 2015 Japan Open champion Nozomi Okuhara (JPN). The two had met ten times in their careers before today's final, with Okuhara leading the series 6-4. Today’s match reflected that parity, as the pair traded leads throughout the first two games forcing a third game to be the decider. In the third game, Marin’s spirit didn’t waiver, and the Spaniard ran away with the game and the 21-19, 17-21, 21-11 win to defend her title.

In men's doubles, world No. 1 Marcus F Gideon and Kevin S Sukamuljo (INA) brought their signature style of kinetic, dizzying-pace badminton in the finals against Li Junhui and Liu Yuchen (CHN) and reasserted their dominance in men’s doubles. In just 38 minutes, the pair stormed away with a 21-11, 21-13 victory.