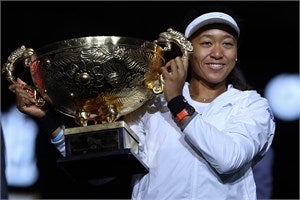 BEIJING — “I still won a slam this year, I won [Osaka]. I'm still here,” said Naomi Osaka (JPN) after her quarterfinal win over Bianca Andreescu at the China Open.

Feeling like “people counted [her] out” after the clay and grass court season, Osaka proved she’s still one of the toughest tests on the WTA tour. The 21-year-old defeated top-ranked Ashleigh Barty in three sets to win her 10th-straight match and second WTA title in the past two weeks.

Ranked No. 4 in the world, Osaka was the fifth player to secure her spot at the WTA finals after handing Andreescu her first loss since March. In the semifinals, she defeated reigning China Open champion Caroline Wozniacki for the first time in her career to set up a marquee match-up with Barty.

Playing her third match in as many days, Osaka dropped the opening set but counted on her serve to power her over the finish line. Winning 80% of her first serve points, Osaka only faced one break point in the final two sets and improved her three-set record to an impressive 16-3 in 2019.

“For me, I just really wanted to win here,” said Osaka. “I felt like I had something to prove.”

With Osaka’s win in Beijing, she captured her third WTA title in 2019 and fifth overall. Osaka will return to action at the Shiseido WTA Finals in Shenzhen at the end of this month.