LONDON – [17] Elena Rybakina and Nick Kyrgios won back-to-back matches on Court 1 to advance to the semifinals of Wimbledon for the first time in their career.

To begin the day, Rybakina dropped the opening set against Ajla Tomljanovic. It was the first set Rybakina had lost the entire tournament. However, the 17 seed was able to cut down on her unforced errors and used her big serve and aggressive game style to claw her way back in the match.

Rybakina held serve, then broke Tomljanovic on her first opportunity, to begin the second set. Despite losing her serve the next game, Rybakina was building momentum. From 2-2, Rybakina reeled off seven straight games to take a 3-0 lead in the deciding set.

She used that 3-game cushion to close out the match with a 4-6, 6-2, 6-3 victory to advance to the semifinals against 2019 Wimbledon Champion Simona Halep.

Kyrgios took Court 1 next and got off to an equally slow start, dropping the first nine points of the match against Cristian Garin.

He put a stop to Garin’s streak at 0-2, 0-15 with an ace, one of 17 he served in the match. Kyrgios settled in, breaking Garin two games later and then again at love to close out the first set, 6-4.

Another break at love at 2-1 in the second would help Kyrgios secure a 2-set lead.

In the third set, Kyrgios saved three breakpoints but was unable to get any looks on the Garin serve, sending the set to a tiebreaker. At 6-5, Garin’s backhand sailed wide. Kyrgios fell to the ground and put his hands on his head realizing he had reached a long-awaited milestone.

For the first time in Kyrgios’ career since making his major debut in 2013, he reached the semifinals of a Grand Slam. Kyrgios will play Rafael Nadal, who he beat for the first time at Wimbledon back in 2014, for a spot in the finals on Friday. 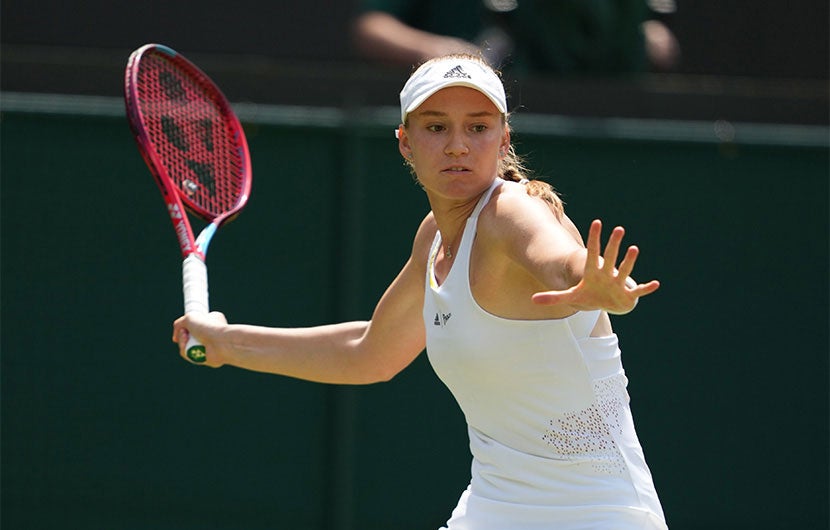