New York- Casper Ruud, the runner-up for the US Open and Roland-Garros this year marked his career-high ranking No.2.

When Casper Ruud saw the pictures of past champions lining the locker room of the US Open, he thought to himself: "There are more faces here than there are at other Grand Slams."

He was right: if you compare the winners of each major tournament since 2010, the US Open has offered the greatest variety of champions. In these 12 years, only the so-called "Big 4" have won Wimbledon.  At the Australian Open, the past 12 titles have been split among only four champions. And at the Roland-Garros, only three players have lifted the trophy.

But in New York, there have been seven champions in the past 12 tournaments. Moreover, four of them, including Andy Murray, grabbed their first career Grand Slam title at this tournament. "Then I should have a chance," Ruud told himself.

With that hope as his driving force, Ruud marched to the final. He was close to grabbing the victory—a first major title that also would have earned him the world No. 1 ranking—but fell just short of that dream, falling in four sets in the final. "I'm proud of the match and the two weeks,” said Ruud, who jumps from No. 7 to No. 2 in the post-US Open ATP rankings. “I gave it all. I left it all out on the court."

When he was asked "What have the Roland-Garros and this tournament taught you about what you need to do to take that next step and win one of these titles?" Ruud smiled softly. “In Roland-Garros, it was hard for me to believe that I could beat Rafa,” he said. “Today was not easier, but I believed it more. I think these two tournaments have sort of made my self-belief to win a Grand Slam grow".

Frances Tiafoe and Caroline Garcia advanced to the Semifinals for the first time at Grand Slam tournaments.

Another player who believed in his potential in this tournament. Frances Tiafoe lost to Alcaraz in the semifinals in a five-set battle.

Tiafoe’s coach, the former top-10 player Wayne Ferreira, said the key to Tiafoe's growth was a change to his diet. “Yeah, it seems simple, but he liked a lot of candy and chocolates and cookies,” Ferreira said with a laugh. "He'd eat at unusual times. He missed breakfast a lot, didn't really have a good set of times on when to eat before matches, what to eat after matches. You need a little guidance on that side, and he's done well on that side of it.”

Tiafoe, eating right and hungrier than ever, hoped for immediate results, but of course it will take time. His new efforts and his talent were showing promise already in this tournament.

“After getting this deep, I understand how much rest is important during two weeks of slams,” Tiafoe said. “Again, I didn't go out to dinner one time. I mean, I knew that, like, I'm definitely falling in love with the process and doing the work much more. I'm working smarter, I'm understanding getting my weaknesses stronger, breaking down my game a lot more.”

Tiafoe said he was committed to learning as he grew. "I am a student of the game again.”

Caroline Garcia also felt a spirit of learning as she experienced a breakthrough result. "I feel already that I can improve many things,” Garcia said. Garcia’s talent hadn’t always translated directly to results. But this summer, winning Cincinnati and reaching the semifinals of the U.S. Open, Garcia showed amazing progress, proving that she can be capable of anything.

The biggest improvements to Garcia’s game were on her return, the lethal weapon that powered her to the semifinals. But after a career-best result in the semifinals, Garcia was focused on doing even better. “I have a very long list of things to improve,” she said with a smile, singling out one item on her list for special mention. “Today the backhand down the line was not working, and I needed it!” she said. “I think we will talk about it tomorrow and see, debrief about all the three weeks and see what we can do”.

Diede De Groot is now the first tennis player in any discipline to complete the Grand Slam in back-to-back years.

Once again, De Groot showed what a real champion she is.

De Groot said ‘At the end of the first set, I already felt like, Okay, I'm relaxing a little bit more now, I'm easing up, or like I'm calming down a little bit. I think that helped me throughout the rest of the match.”

Not only De Groot’s achievements, Team Yonex advanced to the finals in 12 categories and won four titles 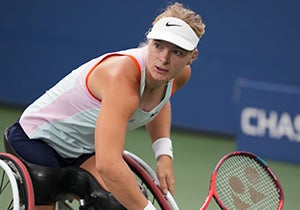