The Legends' Vision was held on November 4th in Mumbai, India, to the wild enthusiasm of approximately 5,000 badminton fans. 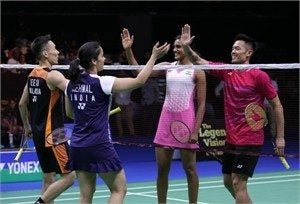 India is said to be the birthplace of modern Badminton and the Legends of India, Pullela Gopichand, winner of the 2001 YONEX All England Open Badminton Championships, and Prakash Padukone, formerly ranked World No. 1, participated to liven up the event. When players such as Srikanth Kidambi, who was recently elevated to World No. 2, Pusarla V. Sindhu, and Saina Nehwal made an appearance, the voltage in the venue reached maximum.

The event included a talk show, exhibition matches, and badminton instruction for local junior athletes. Through the serious mixed doubles games played together with the Legends and junior athletes, every point drew cheers from the audience, and everyone was delighted to see amazing plays. Peter commented that, “Indian badminton has the potential to expand even further. We want to create opportunities for the generation that will come after Sindhu and the others.”

The next event will take place on December 3rd in Paris, France, where Peter is coaching the national team.

Note: There are some opinions about the birthplace of badminton. According to one theory, Poona, which was played in India, was said to be the origin of modern badminton.

Learn more about The Legends' Vision.