From November 30th to December 2nd, The Legends’ Vision World Tour made its way to San Jose, California. The three-day event aimed at contributing to the sport of badminton through a junior badminton clinic, 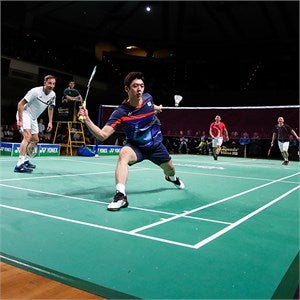 an exhibition with the Legends and local Legends Ambassadors, appearances at tech companies such as Google, and leaving three lasting legacies* in California: 1) A Racquet’s Second Life, 2) Unlock Badminton, and 3) the Legends’ Summer Club League.

Unfortunately, due to last-minute travel complications, Lee Chong Wei, Taufik Hidayat, and Lin Dan were unable to partake in the tour and the launching of the local legacies.

On Day 1 of The Legends’ Vision World Tour, California, the team hosted a three-hour junior badminton clinic at Independence High School for approximately 180 juniors ranging from age 6 to 18. The clinic taught not only the physical skills required in badminton, but also the mentality and strategy needed to become a champion. Peter Gade offered advice on deception and shuttle control, Lee Yong Dae provided lessons on doubles defense to counter-attack, and the Ambassadors each taught techniques from their personal specialties.

On Day 2, a special exhibition was held at the San Jose Civic. The exhibition showcased the Legends’ and Ambassadors’ high-level badminton, while also creating a stage for future American stars to rally against some of the world’s best badminton athletes. Between matches, the Legends and Ambassadors announced each local legacy initiative*, promising their commitment to the cause.

The evening began with a triples match between Peter Gade, Tony Gunawan, and Beiwen Zhang versus Lee Yong Dae, Halim Haryanto Ho, and Michelle Li. Juniors such as Natalie Chi challenged world class players like Michelle Li to 7-point exhibition matches. The final match of the evening was an exciting and heated match between the 2005 World Champion pair, Tony Gunawan and Howard Bach versus Peter Gade and Lee Yong Dae.

On the final day of the tour, the Legends made an appearance at Amazon and attended the Google Headquarters to participate in a Talks at Google interview with Senior Vice President, Prabhakar Raghavan. To an audience of Googlers, Peter Gade and Lee Yong Dae explained the purpose of their visit to California, while also speaking of their personal experiences competing at the world’s top level in badminton. The interview will be released in later weeks on Google’s Talk at Google YouTube channel.

The Legends’ Vision World Tour will be making its next stop in Birmingham, England in March 2020. The five Legends are planning clinics and legacy programs to help the sport of badminton in England, and have scheduled an exhibition at the finals of the All England Badminton Championships.

The key component of the World Tour was the announcement of three local legacy initiatives. Firstly, the Legends’ Vision team partnered with Playworks, a non-profit organization, to kick off A Racquet’s Second Life, a racquet donation project to provide inner-city youth programs with badminton equipment. Secondly, in efforts to make world-class badminton knowledge accessible to more juniors, the Legends Ambassadors will begin Unlock Badminton, a series of free clinics for high school badminton coaches throughout California.