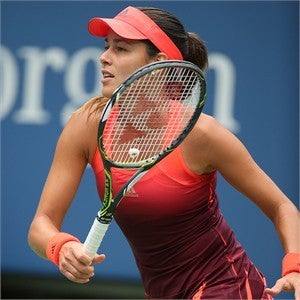 Receiving a first-round bye, Ana Ivanovic (EZONE DR 98) is into the quarterfinals after her second-round encounter with Italian Camila Giorgi. The defending champion was tested in the opening set, but managed to get the edge over her opponent with two break points. She would break her opponent a total of five times throughout the match, while saving three. The second set saw the Serb led by two games, but she came rushing back, reeling off six games to close the match at 7-5, 6-2.

The quarterfinals today see Ana clash with Dominika Cibulkova, Belinda Bencic (EZONE DR 100, POLYTOUR HS 125) face Garbine Muguruza and Angelique Kerber (VCORE Si 100) go up against Caroline Wozniacki. Ana last met her Slovak rival at the US Open, and is looking to get the best of her at this year’s Toray PPO. Angelique is up 6-4 head to head with Wozniacki, while Belinda faces Muguruza for the first time.

After dropping by Tokyo earlier this week, Martina Hingis (EZONE Ai 100, POLYTOUR PRO 125, SHT-PROL) touched down in China, making it into the semifinals at the Guangzhou Women's Open. Up against Anna-Lena Friedsam and Monica Niculescu, Martina and her partner Sania Mirza demonstrated the same high standard of tennis that earned them their two Grand Slam titles this year at Wimbledon and the US Open. The duo saved seven of eight break points faced, recording a 6-2, 6-3 victory in just over an hour.