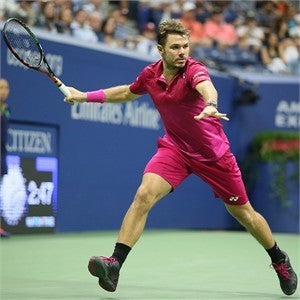 The Stanimal lived up to his nickname under the lights of Arthur Ashe Stadium, with beast-level strength against the World No. 1 Serb. Despite dropping the first set after a tight tiebreaker, Stan cranked up his power and aggression to stay on top in the remaining sets. With his solid forehand and ferocious backhand, Stan blew past the Serb’s heavy defense time and time again, clocking in a total of 46 winners throughout the match. Djokovic only scored 30. Stan also impressed in the more tricky moments of the match, maintaining mental and physical toughness to save 14 break points.

With solid strength and focus, Stan commanded in the final set. After Stan went up AD-40 with a forehand volley winner, Djokovic proceeded to send the ball out, earning Stan the Man his third Grand Slam title with a final score of 6-7(1), 6-4, 7-5, 6-3. With this title to his name, Stan now holds an impressive 11-match winning streak in finals starting from 2014.

“This is amazing. I came here without expecting to win it. When I stepped on the court, I tried to win every match. I did everything today against Novak. The crowd and atmosphere was something I've never had before. It's an amazing night," exclaimed Stan after the big match.

The previous day saw newly appointed World No. 1 Angelique Kerber (VCORE Si 100, POLYTOUR FIRE 120) win her second Grand Slam title for the year—and of her career—against No. 10 seed Karolina Pliskova. Angie had not dropped a single set through to the semifinal, and this same composure and confidence was very apparent in the final. Angie kept her opponent moving with her steady ground strokes, and broke her opponent to take set one.

The two women would draw even in the second, but Angie refused to falter heading into the final set. The set would open with Pliskova taking the lead, but Angelique stayed the course to tie 3-3. The German then gained control of the match, and moved forward to secure a 6-3, 4-6, 6-4 win and earn her second Grand Slam title. She becomes the first German woman to win at the tournament since Steffi Graf in 1996.

Going all the way back to her junior years, Angelique has only ever played with Yonex racquets. She spoke to us after the final match about her relationship with Yonex, “I have been playing with Yonex for many years now. For me the racquet is just perfect. I’ve had so much success with it.”

Stan and Angie’s wins at the 2016 US Open marks the first time two Yonex players have ever won a Slam singles title at the same time.