The VCORE Duel G 97 earned the Editor’s Choice Award for “Best Heavy Hitter” in Tennis Magazine’s 2016 Racquet Guide, found in the March/April issue of the magazine. 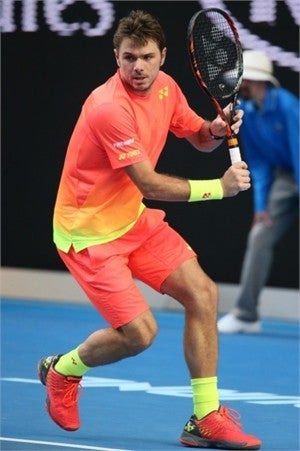 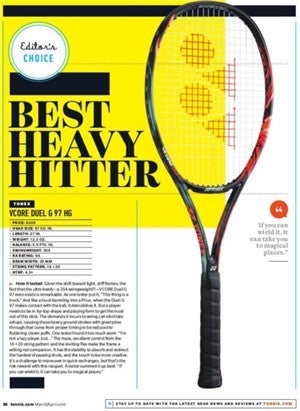 As in previous years, testing was exhaustive. A board of many different testers, spanning from coaches, ex-players and racquet technicians carried out tests on the racquets strung to the manufactures’ specifications, looking at power, control, comfort, maneuverability and playability. The testers also collected feedback from playing partners, students, and general users to get a full and complete picture of each racquet.

Reviews praised the stick’s extraordinary ball-crushing power. “Like a truck barreling into a Prius, when the Duel G 97 makes contact with the ball, it demolishes it.” extoled the review. One tester told Tennis Magazine “If you can wield it, it can take you to magical places.”

This new addition to the VCORE line was made in close collaboration with Stan Wawrinka, putting the ferocious combo of ball-crushing power and incredible spin in players’ hands. With the VCORE Duel G, there is no loss of power or speed after the bounce, with height of the ball post-bounce up by 14% and overall spin up by 8%. Stan The Man has already picked two titles armed with the new racquet. He first hit the scene with the Duel G at the Aircel Chennai Open 2016, picking up his third consecutive title at the tournament. He would proceed to secure his first Dubai Duty Free Tennis Championships title with the racquet at the end of last month.