In 2017, we welcomed new World No.1s, celebrated the sport of badminton and its legendary players through the Legends’ Vision World Tour, and closed off the season with the Dubai World Superseries Finals, where 12 of the 16 finalists were Team Yonex players. 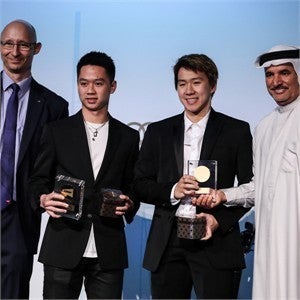 For Marcus Gideon and doubles partner Kevin Sukamuljo, 2017 was a record-breaking year. Earning a remarkable seven titles this season, the duo received the BWF Male Player of the Year Award and finished the year as Dubai World Superseries Champions and World No.1. Gideon continues to compete with the latest Yonex ASTROX racquet designed for steeper smashes and attacking plays.

As of this September, Viktor Axelsen led the court as the reigning 2017 Total BWF World Champion. The new World No.1 continued his success through the end of the season at the Dubai World Superseries Finals as he defeated fellow Yonex player Lee Chong Wei in the finals for a second consecutive finals title.

Yonex badminton Legends Peter Gade, Taufik Hidayat, Lee Chong Wei, and Lin Dan traveled the world for The Legends’ Vision tour to spread Yonex’s global initiative of transforming badminton into a major global phenomenon. Crowds of fans and badminton players in Tokyo, Mumbai, and Paris welcomed the Legends, as they hosted exhibition matches, clinics, and contributed to each local community to foster the growth of badminton. Where would you like the Legends to visit in 2018?