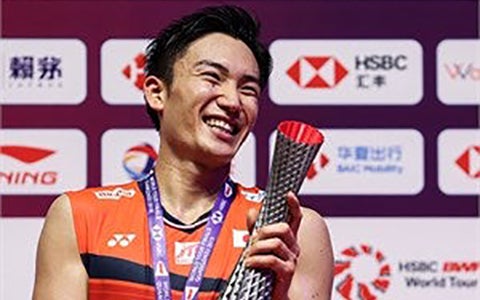 GUANGZHOU, China – Kento Momota (JPN), if he hadn’t done so already with his storied, meteoric comeback, has solidified his place in badminton history, becoming the first-ever men’s singles player to win eleven World Tour titles in a single season. The previous record was ten, set by none other than Lee Chong Wei in 2010.

After losing the opening game to Anthony Ginting (INA), Momota seemed destined to repeat his Tour Finals collapse of last year against Shi Yu Qi. But finding himself down 12-9 in the second game, Momota remained patient, and slowly began to set the rhythm of the match. Suddenly he was in control, keeping Ginting chasing shuttles all over the court, and forcing a third game. It was there that he once again found himself in trouble, down 12-5 at one point, but while Ginting’s endurance began to flag, Momota remained solid. After one hour and twenty-seven minutes, he emerged 17-21, 21-17, 21-14 with his record 11th title.

Other #TeamYonex finalists who earned silver medals were Mayu Matsumoto (JPN) and Wakana Nagahara (JPN), who succumbed to the Chinese pair of Chen Qing Chen and Jia Yi Fan in women’s doubles, as well as compatriot Hiroyuki Endo (JPN), who fell, along with his partner Yuta Watanabe, to the Indonesian “Daddies,” Mohammad Ahsan and Hendra Setiawan.