The excitement continues into round 2 of this year’s Yonex All England Open. 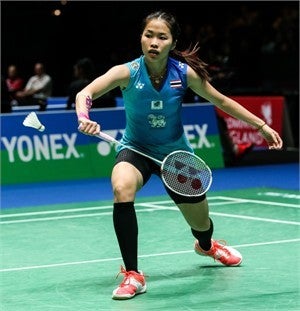 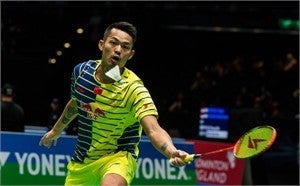 Backed by the fervent cheers of an enthusiastic home crowd, No. 7 seeds  Chris Adcock (VOLTRIC Z-FORCE Ⅱ, POWER CUSHION AERUS MENS) and Gabrielle Adcock (VOLTRIC Z-FORCE Ⅱ, POWER CUSHION AERUS LADIES) advanced into their third straight quarterfinal against Korean pair Kim Gi Jung and Shin Seung Chan. The crowd stuck with the pair through thick and thin, cheering at every point in the neck-and-neck second game. The duo conquered in straight games, 21-12 21-16. “It’s always great to play in front of a home crowd, especially at the Yonex All England,” commented Chris on the crowd’s great support.

As of this year, the English pair has been competing in new POWER CUSHION AERUS shoes. “I wore the blue yesterday, so I thought I’d mix it up today and wear the pink,” mentioned Gabby on the shoes’ color options, while Chris had this to say about their performance, “They’re very light and really comfortable. Of course, with the POWER CUSHION, you can always trust them to do a good job.”

Lin Dan (VOLTRIC Z-FORCE II LD, SHBSC6LDEX)leads the way in men’s singles, advancing into the quarterfinals with a win over Japan’s Sho Sasaki. The Japanese vet gave five-time World Champion Lin Dan a run for his money in the opening game, catching up and keeping pace with the Chinese juggernaut to narrowly seal game 1. The second and third game would see Lin Dan turn the tables, striking with agility, precision and complexity. A resounding smash near the end of the final game would be followed by Sho sending the shuttle wide, bringing Lin Dan his victory. The final score came to 20-22 21-6 21-8.

Men’s singles also saw Viktor Axelsen (ARCSABER 11, Yonex Shoes) advance after a tough outing with Korean Son Wan Ho. Both players drew even at slim margins, but the young Danish World No. 6 demonstrated his superiority in the third game, his powerful play forcing the Korean into errors. After a huge smash on the 19th point, the Korean sent the shuttle careening into the net on Viktor’s match point, the final score coming to 21-19 22-24 21-12.

It was a battle of youngsters in women’s singles with 21-year-old Ratchanok Intanon (VOLTRIC 70 E-tune, POWER CUSHION 02 LADIES) facing off against 18-year-old Akane Yamaguchi (VOLTRIC 70 E-tune). 2015 Bitburger Open champ Akane did her best to keep up to pace with the World No. 4 Thai, but Ratchanok’s moves were too quick and decisive. The 2013 World Champion expertly seized full control of the match, setting up and delivering on opportunities to strike. Ratchanok took her second round match in straight games at 21-9 21-13 when Akane sent the shuttle out of bounds.